What is Cashmere Sky?

In Ion Valley, a vast majority of the world is covered in a thick poisonous fog. Land has become scarce, forcing the population to move to higher ground. As wars were fought and decades passed, factions began to form on the remaining land masses. Being geographically rich in resources with large territory, it didn’t take long for Ion Valley to establish worldwide dominance. However, not everyone was so lucky.

Refugees are pouring in. Tensions are brewing. Whispers of rebellion are in the air. As Police Commissioner, Abram Cashmere has been in charge of keeping Ion Valley safe. There have been sightings of strange machines all over the valley that lead Abram into a dangerous investigation, which unfortunately costs him his life.

Devasted by the news, the family must learn to perservere. As the years pass, Arlo and Enzo stumble upon secrets regarding their father’s untimely death. As their journey continues, they must gather their courage as the perils they face become far greater than they ever anticipated. They must find a way to not just avenge their father, but save the entire world! 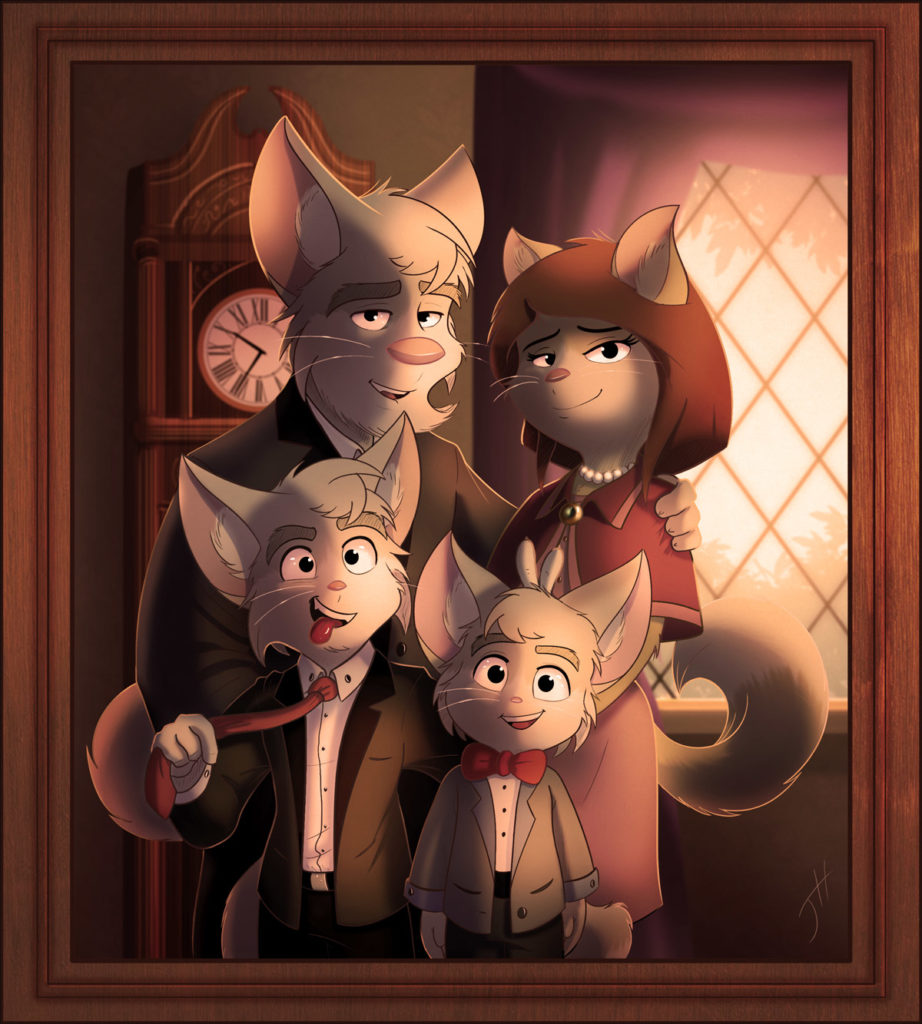 Cashmere Sky is a retrofuture character-driven action/drama following two brothers, Arlo and Enzo, who both endure the hardships of coping with loss, finding courage, leadership, and acceptance. It is described as a retro-future world with “solarpunk” tones bringing together an exciting brew of airships, electricity, science, and a race of anthro cat-like people. Our heroes journey will take them from places like a science classroom to terrifying high speed train chases and airship battles. A main theme is the importance of family through challenging circumstances.

The project is heavily inspired by TV and feature film animation pulling from many twentieth century trends. The story is told with a whimsical nature while also having heavier and relatable themes to an older audience. The style and concepts are derived by many past inspirations including Fred Quimby, Chuck Jones, Preston Blair, and Hanna Barbera while moving to later inspirations such as Glen Keane, Don Bluth, and Bill Watterson.

Occasionally regarded as someone from another planet or a swiss army knife only dropped a couple times, Jared has been a creative force since he was very young. From an early age he was known for always having a pencil in his hand, drawing a plethora of landscapes and architecture, competing with other classmates during grade school.

Long story short, most of Jared’s past life ended up being in music and eventually obtained his Bachelor’s from the prestigious Berklee College of Music. Jared eventually refocused his energy to character design and digital illustration. As if possessed by an unknown entity, Jared has invested thousands of hours with a furiously ambitious goal of doing a graphic novel, desperately wanting to tap into his childhood nostalgia for others to enjoy.

Jared has illustrated and been published in children’s books alongside video game development. His primary focus is obviously the graphic novel Cashmere Sky, in which he plans to work on for many years to come! The road is unknown, but his goals are certain. Jared currently resides in Indianapolis.

Aaron Schweizer is influenced by many of his favorite movies, stories and comics from childhood. This includes the Tim Burton Batman films, Back to the Future, Robocop, Star Trek TNG, Goonies, the Princess Bride and more. He is drawn not only to the strong hero archetype portrayed in those stories but also to the light-hearted heroes, like one Mr. Marty McFly.

Aaron was born and raised in Indiana. He shares his domicile with his wife, two small children, a dog and three cats. He has had previous work published in Black Cross magazine and in his spare time he enjoys writing, reading, creating cosplay, and video games. Currently, he is reading various titles from DC Comics, Image, and other independent creators.